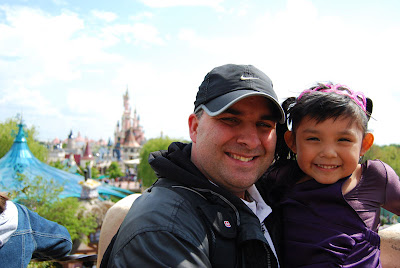 so, today, our pictures are all about Brenna (by herself - sorry, Iwill put the character pictures up tomorrow). I love the picture above - Brenna had one of her best smiles for it! (by the way, I made the purple dress she is wearing - I was so proud of myself for putting it together quickly at the last minute - I think it came out great (and I will have a dress that matches it for Brenna's birthday party this year)). Below, riding the Magic Carpet ride - she liked that she could help control the up and down. 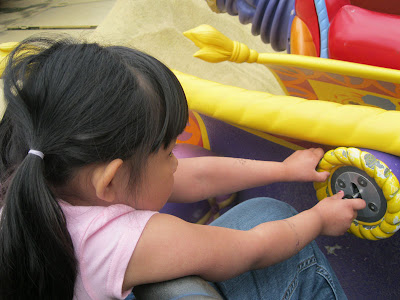 Posing with the cardboard cutouts (and we did go up and see the characters too). 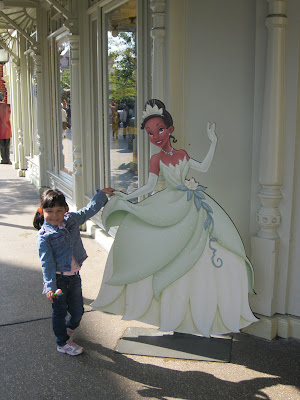 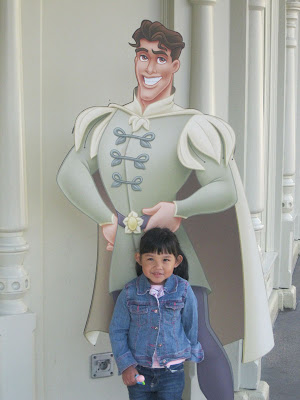 Brenna wasn't familiar with this movie (Alice in Wonderland), so we watched the seen on youtube yesterday. (Now, I can't get the song out of my head). 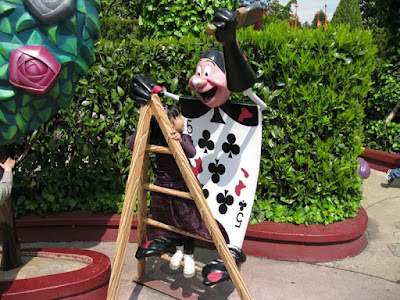 A chair in Wonderland 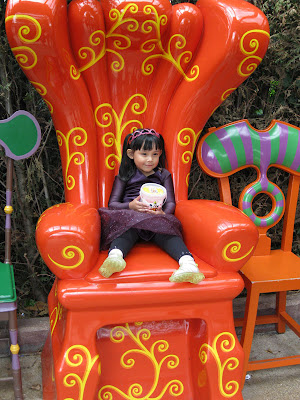 Brenna on one of the beautiful horses. 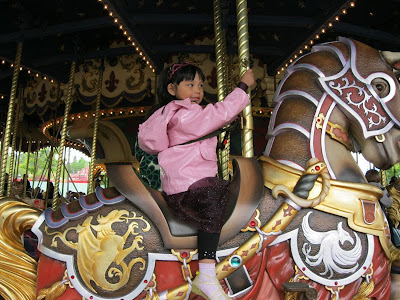 Brenna was not as much in the mood for pictures the second day - here she is telling me no pictures :o) 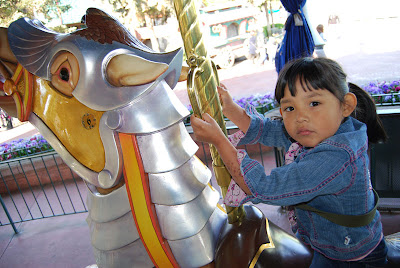 I love Brenna's smile here - this was during our extra morning hours - she got to ride all her favorite rides twice in the morning :0) 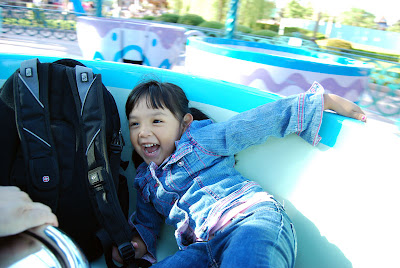 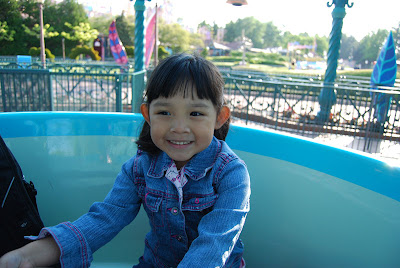 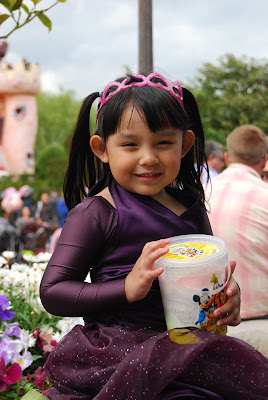 I love the wrinkled nose in the one below :o) 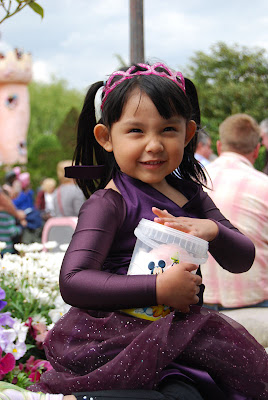 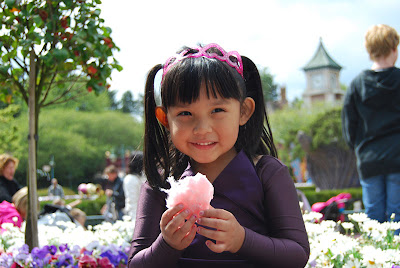 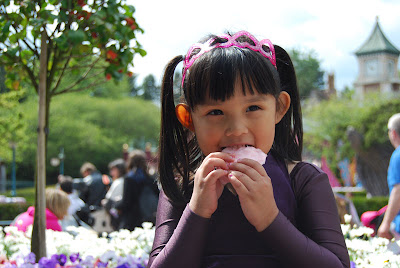 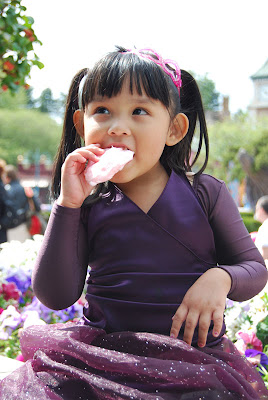 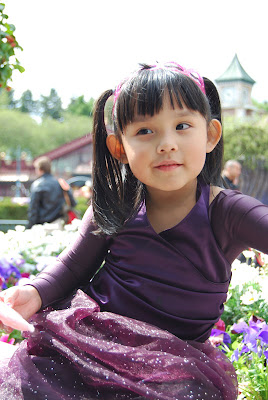 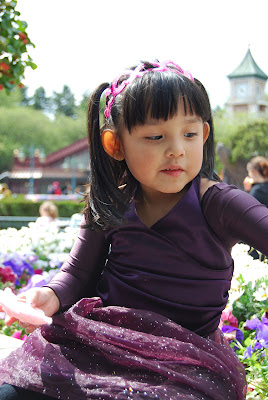 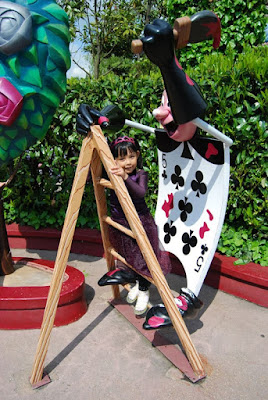 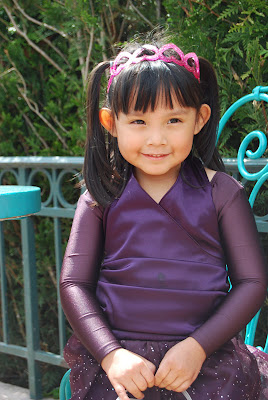 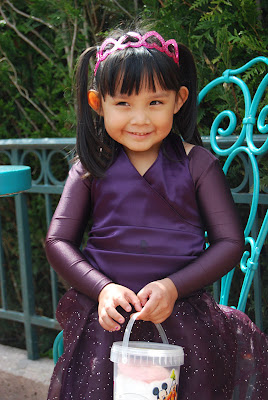 Brenna showing off her scared face below 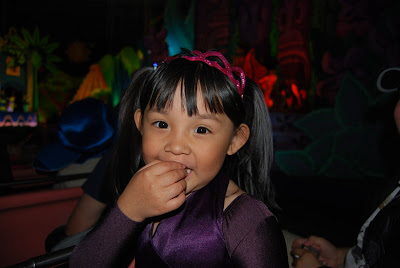 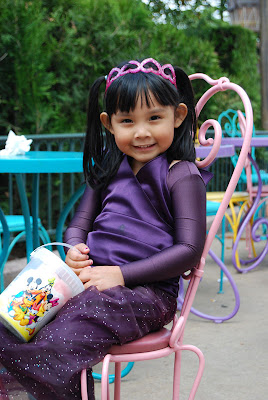 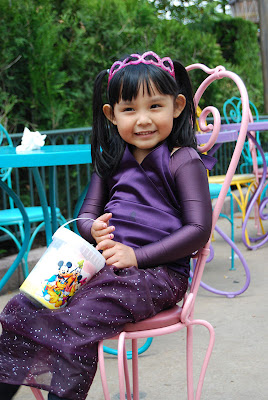 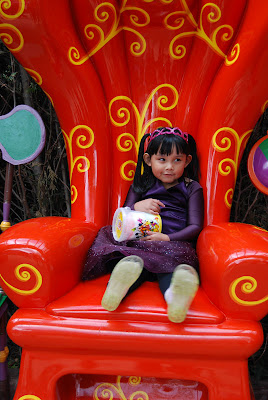 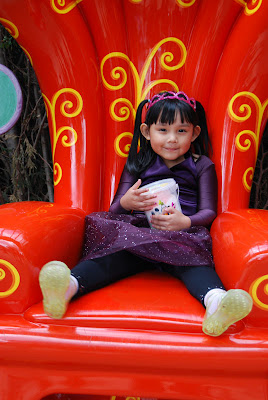 Hope all is well out there! Things are good here - we are all just recovering from our fun filled trip this week to Paris Disney :o)
Brenna had a blast (as expected) - I don't think she can pick what was her favorite - between the rides (she loved the Teacups, the Carousel, It's a Small World, and Peter Pan's flight), seeing the princesses, and the great parade. We took the train from France, so it was about a 2 1/2 hour journey there on Monday (which was good, but all very early - we left our house at 5 am on Monday). Brenna was so excited, she was ready to go as soon as she was awake on Monday morning. I think Paris Disney is set up very well (and I guess it should be as it is only about 17 years old - Brenna and I went to the 15 year celebration in 2008) - the train station comes out right in front of the park (like 100 meters from the entrance) and our hotel was just through Disney Village. At our hotel (before we even got up to the room) - Brenna got a chance to pose with Minnie Mouse. Then we dropped off our bags in our room, and headed to the park for the day (and Brenna changed into her princess dress). The morning called for a 20% chance of rain - I think maybe they should have had that percentage higher as it poured while we were waiting in line for Mickey, but luckily we were prepared with our rain coats and umbrella - so we didn't get soaked like some of the people did. After our picture with Mickey, we headed to Fantasyland, where Brenna got a chance to "play" all day. We rode the carousel once and posed with Mary Poppins and Bert and then it was off to our Princess (and Prince) lunch. All of the princesses at the park looked really good this year and all of them were great with kids. They all get down on their level to talk with them (and they all told Brenna how pretty she looked in her dress). At the lunch, Brenna had a chance to see Belle (and the Beast), Cinderella, and Ariel (and Prince Eric) (and also 2 of the mice from Cinderella). After lunch (it lasted about 2 hours, but I would say it was worth it) - it was off to the teacups and then It's a Small World (among other rides). I got to say that it probably takes a lot more talent to be a princess at Paris Disney than at the US parks - all the characters (that talked) were fluent in both English and French (and I wonder what other languages) - pretty impressive for the kids. Brenna had alot of fun going into Wonderland with all the mazes and other Wonderland stuff. Then it was time to get a spot for the parade - Brenna and I sat and Dustin stood behind us. Brenna loved the parade this year - she knows about all the characters and the princesses did their dancing right in front of us (which was great for Brenna). After the parade, we decided the day had been long enough and it was time to head back to our hotel (which was good - about 5 minutes out of the park, Brenna was asleep on Dustin's shoulders). We stopped and picked up supper and pretty much called it an evening.
On Tuesday, we woke up early, ready to go (hah - at least Brenna and I did - Dustin still looked pretty tired). So, after a quick breakfast at the hotel and a picture with Eeyore, we were off to the park for the extra "magic" hours (those are pretty awesome - Brenna got to ride all her favorite rides twice). When the Walt Disney Studios park opened in the morning, we switched parks so that Brenna could see a couple shows - we went to the Playhouse disney show and also a show called Animagique. It is tough to say which show that Brenna liked more - but with the bubbles and confetti that flew at the first show, I would probably say that one. (Plus, the first show had Handy Manny - one of her favorites - too bad we didn't catch one of the shows in English, but Brenna didn't mind seeing it in French). Then we switched back to Disneyland park so that we could see Tiana from the Princess and the frog. We didn't realize that you had to be in line right at the designated time on the schedule, but we made it to the time we hoped for. Brenna wasn't as independant with the characters the second day, so I think I was in the pictures with her for all the characters on the second day (except for Eeyore at the hotel, lol). We let Brenna pick our afternoon rides and then switched parks again to see another show before heading to pick up our luggage. Brenna fell asleep on the train ride home (pretty much the whole trip).
Overall, I would say that we had a great time at Paris Disney. We only have enough vacation days here for one more trip - anyone have any suggestions of great family trips to take?
Well, Take Care!