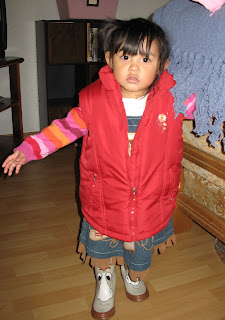 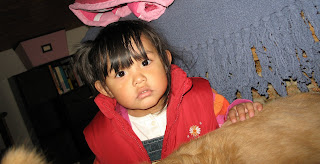 Well - Dustin definetly gave the peanut butter cake a two thumbs up when he told me this morning not to make it very often (his way of saying that it is too good for him to stop eating it :-) Thanks to our peanut butter and brown sugar "supplier" in the US. I'm going to try that recipe at least one more time with the stuff from over here to see if it is as good. We go to France on Tuesday, so I am looking forward to getting the brown sugar and vanilla from there to see how it is.
For whatever reason, I couldn't sleep last night so today has been pretty productive... Got some much needed cleaning accomplished, walked the dog, and already exercised (although with the "junk" that I have eaten in the last two days, I may want to think about exercising again :-) Brenna and I also made it out for a nice walk which was nice after being the house all day yesterday.
We had Brenna's music class today - she really likes it. She is a little jumping bean in the class. There were more kids there today, and Brenna did really well with that :-)
Thought everyone might get a kick out of her outfit today. In both pictures, she was telling me "NO PICTURES, MAMA..." Guess I have had the camera out too much on her, but I just try to capture a little something each day :-)

I looooooove the boots! She reminds me of her cousin, always just a little on the over "dressed" side, which in it's own way is a good thing. Sounds like you had some yummy goodies yesterday and today...the pie/cake is gone???? It's fun to read the blog everyday and see pics, I'm sure you're right and that Brenna is quite tired of all the pictures!